I must have a thing for the Knowles sisters because my stream of consciousness seems to ring in my ears when it comes to recognizing the message in the symbols of their art. First it was Solange’s wedding and now Beyonce’s recent single release, Formation.

Symbols are everywhere and their primary function is to speak to the subconscious mind. Celebrities, marketing, movies, performances, you name it, they are symbols and used as rituals to speak to the masses.

Now let me just begin by saying that this is not about “conspiracies” and the “Illuminati”, as interestingly enough Beyonce mentioned it at the start of formation.

This is very poignant because people are too caught up in this “Illuminati mess” about white people having “supernatural” powers and ancient knowledge over people of color and Beyonce has to bow down to their powers and initiations to achieve her success.

I think what offends her most that people would attribute her success to the so called white Devil worship in contrast to her born gift and ancestors acknowledgement.

Keep in mind Beyonce is well traveled as she has visited Cuba and  Egypt so I’m sure she understands where she comes from.  But let’s get into the metaphysical and Esoteric symbolical breakdown of this video.  I watched this video several times without sound and just watched the video in silence to capture as many images as possible without any distractions.

I watch things in symbolic form.  I look at life as a work of art and interpret and decode it as I see it. 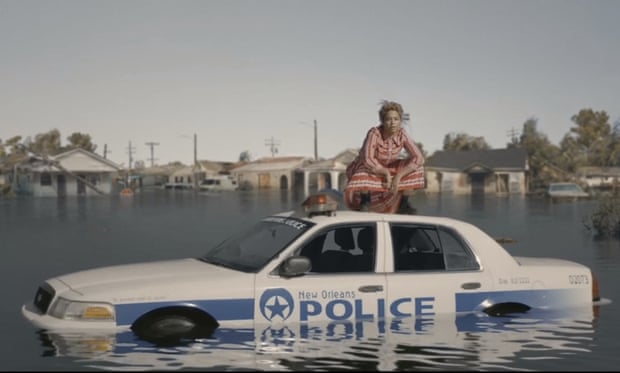 1. Beyonce on top of a police car where a town is submerged under water.

To me this represents Yemaya &amp; Oshun the African Deities of water.  Most appealing to me however, is the symbol of the age of Aquarius and of course its release during its astrological season.

It is said that the earth has astrological phases in which depending on that astrological sign’s characteristics, it’s people, culture, symbols, behavior display aspects of those energies.

The age of Aquarius (the astrological season we’re in or entering) is about information, intellect, spirituality, information and technology.  She is standing on top of authority and the cop car, (symbol of oppression, authority) is submerged by the water, nature. Notice how people are trying to search for “consciousness” grow their hair “natural” “eat clean” and all these recent health and spirituality trends? That is the influence of the age of Aquarius.

This image represents to me that if you have knowledge of your history you can stand on top of oppression despite the adversity you face.  Nature will fuck everything up but keep you alive to keep  your spirit going.

Now when I got to this scene, I immediately saw Baron Samedi the Haitian Voodoo Loa of Death and resurrection.  He is primarily symbolized by a top hat, although not exactly a top hat worn by Beyonce, the most eye catching aspect to me was the hat nonetheless, an ode to El Baron. It actually looks like Beyonce is standing at the door of a “dead” dilapidated entryway almost like a cemetery.

In the same frame we have a group of men of which one in particular stands next to Beyonce wearing a red hat.  This is not just any hat, its called a Fez which the Black Moors who ruled Europe for hundreds of years and I’m sure has roots to Beyonce’s roots to some degree.  I remember many years ago when People began referring to Beyonce as “Bey”.  I thought to myself back then is Beyonce a Moor? Bey is actually a reference of status and royalty within the Moors and upon my recent research a title of chieftain during the Ottoman Empire in Persia.

Also during one of these frames. you can see Beyonce’s head swing back and forth as if she were “possessed” or shaking something off.  Very interesting stuff.

You can’t deny the ritual attire of all white of all hoodoo, Santeria and voodoun followers.  I totally see here all of the sisterhood of “witches” priestesses and the like.  She also depicted many portrait paintings of black women representing history, the ancestors

I get a lot of vibrations of Beyonce and the water element.  Here a mermaid, Yemaya, stands out to me.  The African water Deity, Olokun.

It also shows a wig shop filled with head mannequins representing “empty heads” and three girls (Triple Godesses) of which the one with the blue hair the camera focuses on. At the beginning of the video you see a ceiling fan with flickering lights which represents the light matrix and 7 spectrums of light.  The heads represents the KA and its also an ode to the Egyptians fascination with hair styles which holds strong in our culture today.

Next scene brings us to a reference to water or rather lack of.  Beyonce is shown clad in all Gucci outfits in an empty pool dancing and sort of in coordination with her dancers to mimic waves or water.  I saw a lot of artificiality with the pool as a  reference and artificial, treated, and chlorinated water or rather the lack of it.

Immediately saw dreadlocks and Medusa with this image.  I’ve sparingly have read about the esoteric meaning about Medusa and its relation to dreads and people’s misconceptions.

In the last scene you see the police car already submergedged finally drown and bring Beyonce with it.  This represented to me Birth through water, consciousness. We have now come to love the mirror reflection (humanity) and not even recognize the true self.  We’re overly consumed with selfies and yet have no connection to self and who we ere, are and will become.

Beyonce seems to be “woke’ and making millions while at it.