Ganesha is one of the most popular Hindu deities perhaps second to Kali. Ganesha is considered as the deity that represents wealth, materialism, knowledge and destroys all things evil and obstacles in your life that may be holding you back. Ganesha is depicted with an elephant head in which there are several stories as to how his head came about. Before any prayers or ritual Ganesha is prayed to and acknowledged before the start of any ritual to ensure prosperity in whichever endeavor the devotee wishes to undertake.

Most paintings of Ganesha depict Ganesha with many symbols relating mostly to the elements of the earth, such as the ego, pride, material gains etc. Which makes sense since Ganesha also rules over the root chakra which is primarily based on the material world, or earth rather. Not only does Ganesha destroys all obstacles but he also places them on your path to teach you lessons and of course remind you that earth is a school and you can’t leave it without learning.

The photos depicting Ganesha are elaborate and with a lot of symbolism. He is celebrated between August and September and his color is red. Ganesha likes to be offered sesame seeds as well as pomegranates and of course all things sweet will also suffice. His favorite plants are the lotus and waterlilies. It is great to work with Ganesha when you are at the threshold of a new life or any start in life for that matter such as moving, new job etc. Ganesha can also be used to work in matters of literature, intelligence,wisdom and all things beneficial to your self realization. 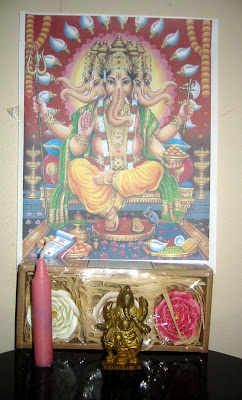 This is my small altar dedicated to Ganesha. I just printed out a picture of Ganesha and taped it. When I turned 16 my mother gave me this small iron statue of Ganesha so I also placed it on the altar along with pretty things and pink candles. Ganesha really likes red but pink also serves it’s purpose. Ganesha rules over success, obstacles and all things that may hinder you from your true spiritual self. Also Ganesha is attributed with success which is obvious because if you can master your worldly desires everything falls into place.

Are you registered for tomorrow’s webinar? Exu