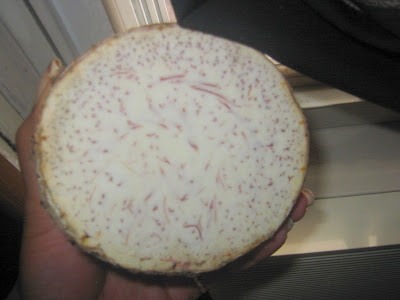 Now that summer is just about here I’m slowly saying good bye to my winter comfort foods. This is perhaps one of my most favorite things to eat for breakfast. Malanga as I know it (many varieties of names, yautia coco being one, I like malanga however) is a very tasty tropical root in the taro/yam family I believe. I never really knew what malanga’s exact health benefits were other than I would be full for hours after eating malanga. However I was reading that it can be a great substitute for flour especially for those who are allergic to it and is high in riboflavin and thiamine. 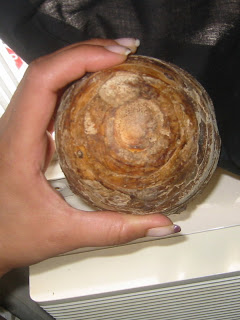 Malanga is a very versatile vegetable pairing up greatly with almost anything. Malanga can be prepared just like you would regular potatoes. Peel the skin, cut them into pieces, boil, mash them up and add butter or whatever. I like to just add olive oil and light salt. Malanga has such a nice soft taste and aroma especially when it’s boiling. It’s like the more elegant exotic version of plain old potatoes. 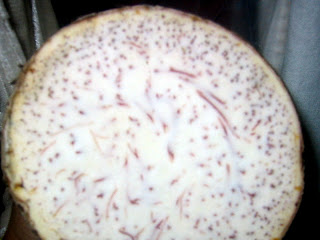 Malanga on the outside looks rugged but when you cut one up you are left with what seems to be purple streaks which almost looks like strands. When it boils the white background turns into this light blue purple as well as the water its boiling in. I like to chop up pieces of malanga and add them to my soups to thicken it a bit. You can also bake them, I prefer them boiled, since I really like it’s creamy texture.

You can have malanga with anything. Hard boiled eggs, a piece of ham, vegetables, cheese, and my favorite bacalao (cod fish). Malanaga deliciously balances the salty tendency of the cod fish.  Malanga can be found year round at your local Latin American produce shops as well as most china towns. Try not to confuse malanga with the rest of the yams. Which I happen to not like much. Malanga tends to be round and oval, not long or skinny like the other yams.

Malanga is also great for toddlers who are starting to eat solid foods. Keeps them full and satisfied for hours.

Did you drink water today? This is your daily re

Sundays are for smudging. What do you like to smud