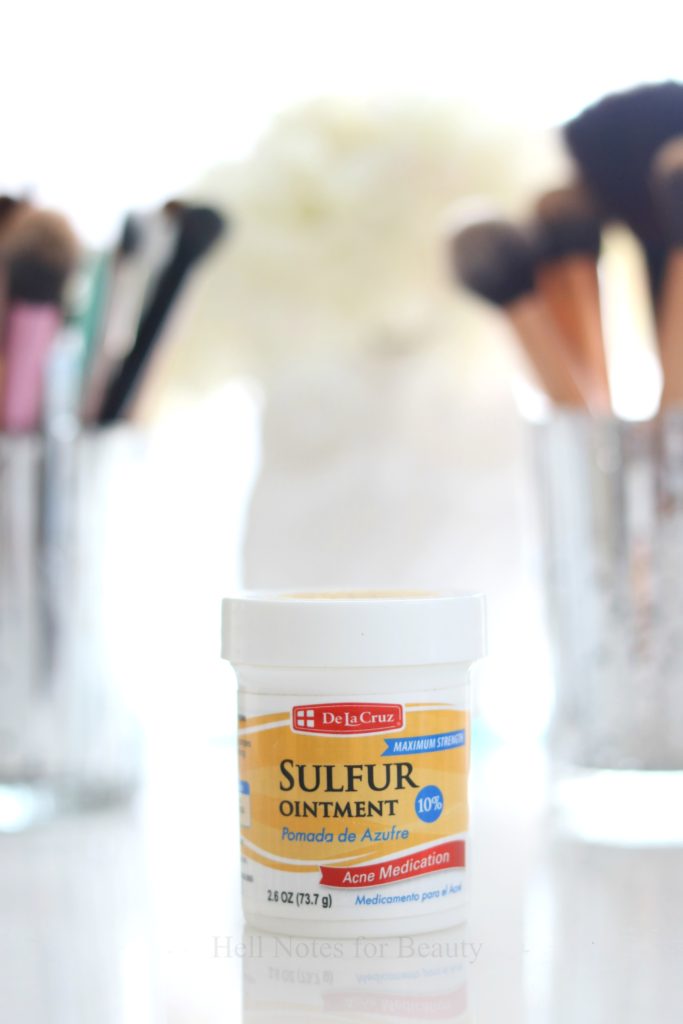 Sulfur sounds like something a chemist would use in a lab and definitely not an ingredient you’d consider for your skin or health.  However, Sulfur is a natural mineral that is essential for the human body to function and it’s by far the most interesting ingredient I’ve added to my skincare routine along with other uses I’ve recently discovered.

So what is Sulfur & how can it be incorporated for health?

Growing up in the late 90’s and early 2000’s I remember a lot of the trouble makers at my High School throw “stink bombs” in the hallways and leave behind the most awful and rotten smell. That awful odor was sulfur mixed with other unforgivable brews that would last for hours.

Sulfur is actually a very important element for human health.  An abundant mineral found in nature and our bodies, it is found in most of our foods such as onions, eggs, garlic and beans among other smelly foods. Our body needs sulfur to maintain healthy skin, bones and teeth as well as assist with muscle structure, metabolism and regulation of blood sugar in addition to other health benefits as mentioned below:

Can I take a Sulfur supplement?

Here are two known types of sulfur supplements which are typically found in powder form. As with most supplements, you want to be extra cautious and do your research before settling for a sulfur supplement as most are overly processed and do not contain the levels of sulfur needed to effectively use it in the body.

In addition to powder, you can also find Sulfur in crystal form which according to my research contains a higher content of sulfur as opposed to the powder.  Crystallized Sulfur is easily accessible and can be used in a variety of ways such as tea, water, etc. Make sure that the Sulfur crystals are organic; it’s from a reputable vendor and not processed with other chemicals or preservatives.

Why is Sulfur good for the skin? 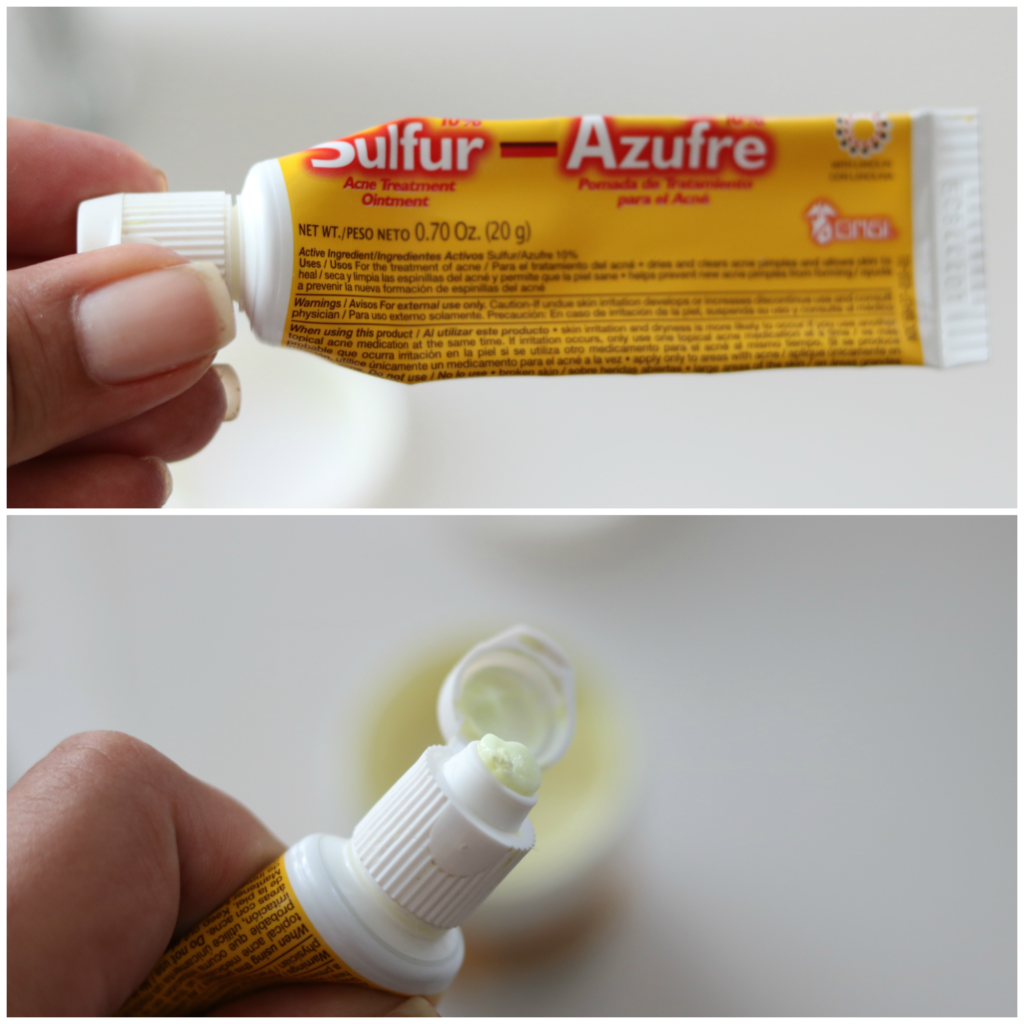 Now that we have an idea of what Sulfur is and how great it can be for health, lets’ look into how Sulfur has benefited my skin.

Sulfur is ideal for those who have acne and sensitive skin due to its anti-inflammatory and anti-bacterial properties. It helps calm and relieve irritation and redness associated with acne and other irritating skin conditions. Sulfur as an active ingredient in your skincare products helps keep the skin clear of acne causing bacteria due to its anti-bacterial properties.

Here are some good reasons to consider sulfur in your skincare:

How do you incorporate Sulfur in your skincare routine?

I first came across Sulfur when I had a very nasty pimple on the side of my cheek and needed a on the spot treatment.  I normally use Mario Badescu’s drying lotion, but did not have any so I settled for this sulfur ointment at my local drugstore.

I purchased the tube first and found that within 2-3 days my pimple was virtually gone. Day 1, the ointment minimized the inflammation, by day 2 the pimple was dried out and by day 3 the pimple was completely flat and dried out with minimal scarring, which disappeared by day 4-5.

How have you been using sulfur for your skin?

I’ve been really impressed with Sulfur and its many benefits for beauty and health.  I only have incorporated Sulfur as an on the spot acne treatment, but definitely will be looking into other masks and sulfur based treatments to add to my skin care routine.  The only Sulfur based product I’m using now is the De La Cruz Sulfur ointment which can be found at most drugstores and reasonably priced at $5.99.   Sulfur can also be used as a scalp treatment to treat dandruff and promote hair growth.

So far I haven’t seen too many sulfur based products but have my eye on one below:

What precautions should you take when using Sulfur for the skin/health?

Beauty: I personally have not had any side effects with using Sulfur. If anything, I’ve noticed it dry out the area where I applied it which is the effect I was looking for, to dry out the pimple. Depending on your skin type and the potency of the sulfur you’re using, you may experience some burning, stinging, tingling, itching, redness, dryness, peeling, or irritation. So be careful with how often you use and discontinue use if you notice any reaction.

Health: Sulfur (MSM) is known to be a relatively safe supplement to consume however, not everyone may react the same so there are some precautions to take as with any supplement. Pregnant and breast feeding women should take extra precautions and avoid sulfur throughout their pregnancy.

To conclude, I enjoyed researching about Sulfur because I never in a million years thought Sulfur had so many benefits.  I always believed it was a toxic substance only used for industrial purposes and never realized until using this product and researching about it that I realized the importance of familiarizing ourselves with different types of ingredients. So do your research too and see what you stumble upon in terms on using sulfur for health and beauty.

*Disclaimer: Please note that this post is for informational purposes only describing my personal experience and research only. Please do not take this as medical or psychiatric diagnosis or recommendations. Please see you medical physician before making any changes to your health regimen. 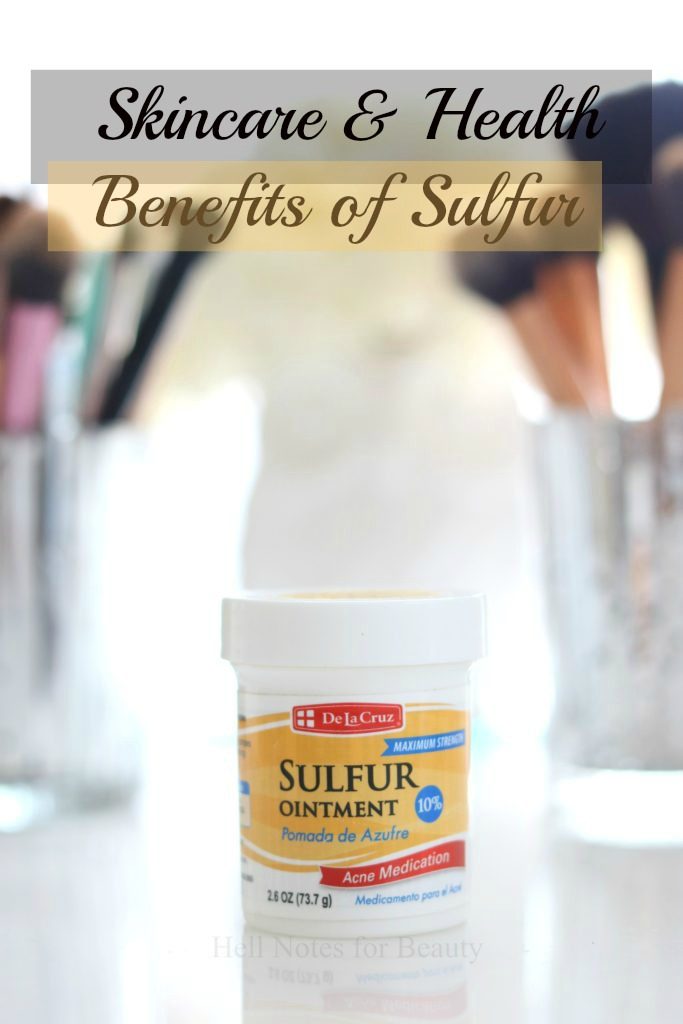 Eating for Beauty by David Wolfe

Sulfur: A missing Link between Soils, Crops and Nutrition by Joseph Jez

The Encyclopedia of Healing Foods by Michael T. Murray