When people hear the word Demon, they immediately shun and remove themselves from the word and want nothing to do with its associated connotations. But, can you blame them? That word is loaded with evil, darkness, suffering and does not bring up anything to be desired in all sense of the word.

But, what is a demon? Why are we afraid to speak that word and why does it have such evil and unspeakable undertones? As a student of the world, I’ve always been curious about those things society has an aversion to, Demons being one of them.

To face our “inner demons” is also a task we avoid at all costs because in all reality everyone wants to be cast in a good light, never their darkness. Religion and Hollywood has also played an important role in perpetuating the negative associations with the word and a thick veil of fear has been established around it.

The study of “spirituality” is not only to study the “good” aspects of our spiritual journey. Buddha delved into his dark side, ego, by way of Mara (Demons) and their temptations which identified the root of his suffering (which were his ego and human desires from within) to achieve enlightenment. A lot of spiritual gurus had to endure hardship or meet the “devil at the cross roads” to attain spiritual wisdom.

Mara at one point told Buddha that he had overcome his ego and finally won, but even then Buddha did not believe his ego because once again that was a tactic the ego was playing against the Buddha, to make him believe he mastered something in which all reality is never ending in its teachings.

The origins of the word Demon

The etymology, history of the word Demon comes from the root word *da- “to divide” (see tide (n.) Demon is Middle English, derived from the Late Latin word “daemon,” which was derived from the original Greek word “daimon.”

Daimon is the Greek derivative for the term demon. In this sense the term “demon” means “replete with knowledge.” The ancient Greeks thought there were good and bad demons called ‘eudemons’ and ‘cacodemons.’ The term ‘daimon’ means “divine power,” “fate” or “god.” Daimons, in Greek mythology, included deified heroes. -Return to Soul by Robert Wilhelm (Encylopedia Mythica)

They were considered intermediary spirits between men and the gods. Good daimons were considered to be guardian spirits, giving guidance and protection to the ones they watched over. Bad daimons led people astray. Socrates said he had a life-time daimon that always warned him of danger and bad judgment, but never directed his actions. He said his daimon was more accurate than omens of either watching the flights or reading the entrails of birds, which were two respected forms of divination of the time.

A Demon or Daemon is known as tutelary (also tutelar), a deity or spirit who is a guardian, patron or protector of a particular place, geographic feature, person, lineage, nation, culture or occupation.  It is said that we are all born with a demon, guardian angel that is with us throughout life &amp; death. “The Genius Within us All”

The word “genius” derives from the same root as “gene” and “genetic,” and meant originally, in Latin, a tutelary god or spirit given to every person at birth.

One’s genius governed one’s fortune and determined one’s character, and ultimately conducted one out of this world into the afterlife. The thinkers of antiquity suggested that every person had two geniuses, one good and one evil, which competed for influence. This concept was alive and well in Shakespeare’s day, and survives in the expression “his better genius.”

The word “genius” soon came to mean a demon or spirit in general, as in the fairy-tale “genie” or “jinni.” Genius thus conceived was part of a system that would later be called psychology, because it was thought of as residing somehow both inside and outside the individual, and motivating behavior. – The Atlantic

Genies, or Jinn as the Arabic word is Romanized, come from a long line of mythological creatures dating back to 2400 BC. According to the Qur’an, God created jinn out of the “fire of a scorching wind”.   Giant Glacier 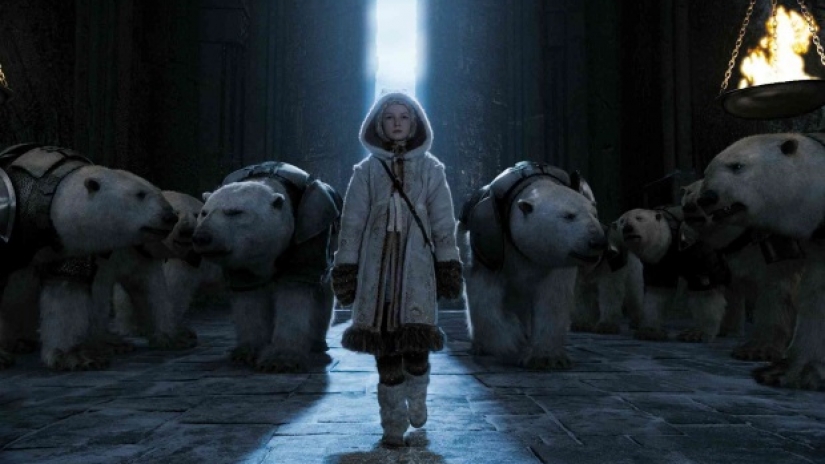 In the movie, The Golden Compass, it illustrates how the tutelary spirit (daemon) manifest within and outside of humans. It is believed that the Daemons shape our personality.

There are many forms and interpretations of demons or tutelary spirits throughout many cultures. But its definition seems to be much more defined as absolute from a religious aspect, more specifically Christian and Catholic faiths. In the film the Golden Compass, Daemons are depicted as sort of spirit animals that throughout childhood can take on may different types of animals, depending on the situation and after some time are “fixed” into this one animal that accompanies us throughout the rest of our lives.

The representation of animals suggests our most primal and basic instincts manifesting and developing as we grow older.  Many cultures, specifically Native American and African spirituality use animals as symbols and guides to describe unique characteristics in both the spirit and mundane dimension.

Spirituality also require us to look at duality. As there is good there is also evil.  Duality is seeing the two sides of the same coin.  The good &amp; the bad.  At some point the “demon” aspect of ourselves has to be addressed and brought up in the journey of spirituality.

Its implications are more broad that what we’ve been led to believe. We’re either protecting our selves from the evil forces these demons posses or suppressing the reality of the word and its role in our existence.